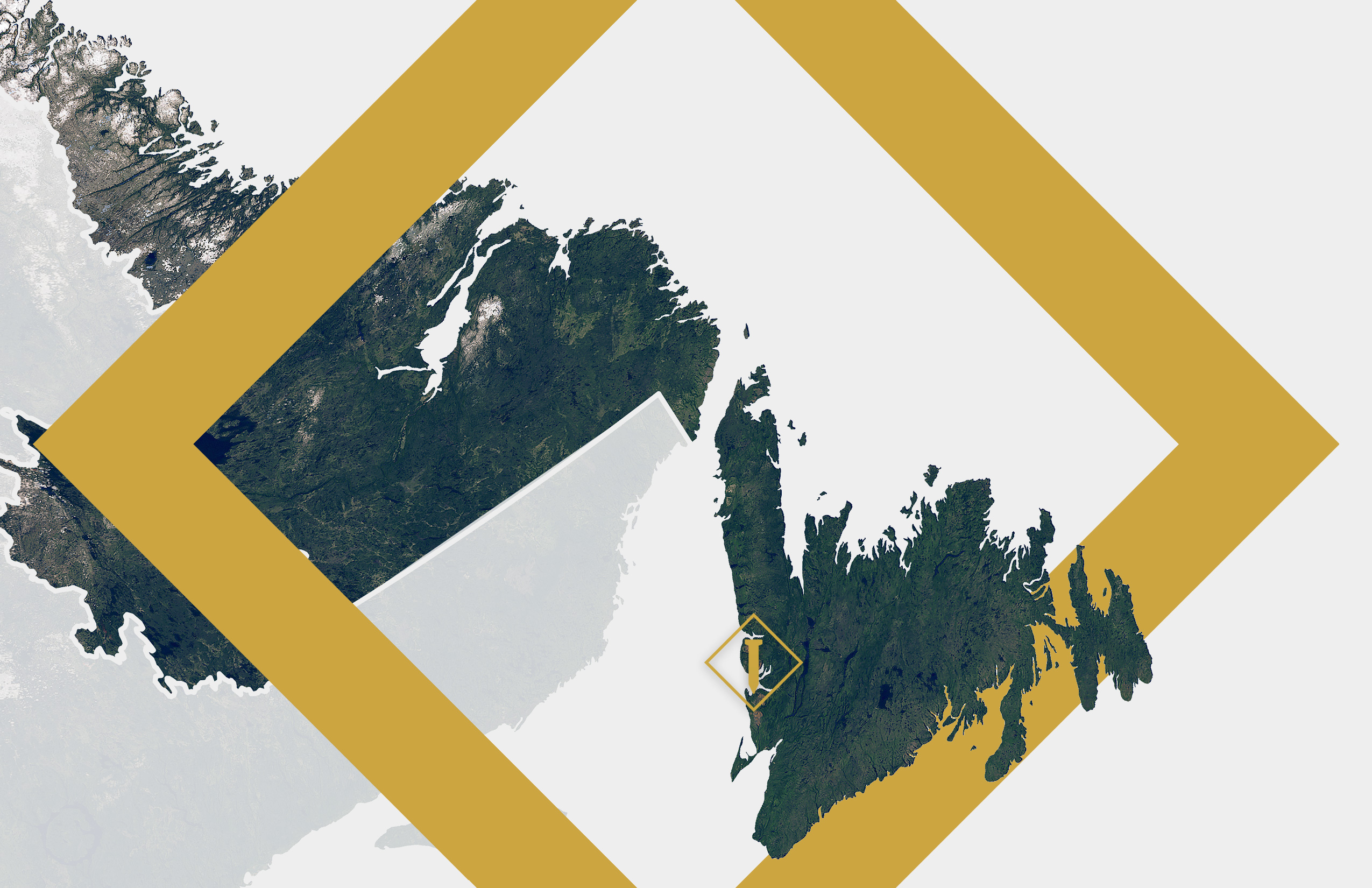 In July 2022, the Company completed the acquisition of Golden Horizon Exploration Corp. (“Golden Horizon”) and through this, the option to acquire 100% interest in the Gregory River Property (“the Property”). On December 7th, 2022, two additional key licences were added to the Property, further consolidating Golden Spike’s land position. The Property is centered over an approximately 11-kilometer-long stretch of the Gregory River volcanogenic massive sulphide (“VMS”) belt, a north-northeast trending corridor of very prospective ground for precious and base metal mineralization. In addition, the Property hosts a cluster of high-grade copper-gold vein structures that occur just east of the VMS-belt.

Intermittent exploration has taken place over the Property since the 1920’s and has resulted in the discovery of numerous high-grade copper and gold prospects and occurrences.  The Property has not seen any significant activity since 2008 and still remains largely underexplored.

The Gregory River Property covers approximately 3,425 hectares and is comprised of 17, mostly contiguous mineral licences, which consolidates the majority of the belt under Golden Spike.   The licences are located on the west coast of the province of Newfoundland and Labrador, 42 km north northwest of the city of Corner Brook, and 53 km west of the city of Deer Lake. Access to the coastal town of Trout River from Deer Lake is very good, along paved highways and from there the Property can be accessed along a network of unmaintained 4-wheel drive roads, ATV trails and footpaths.  Alternatively, access is available by helicopter from the town of Pasadena, approximately 50 kilometers to the southeast. 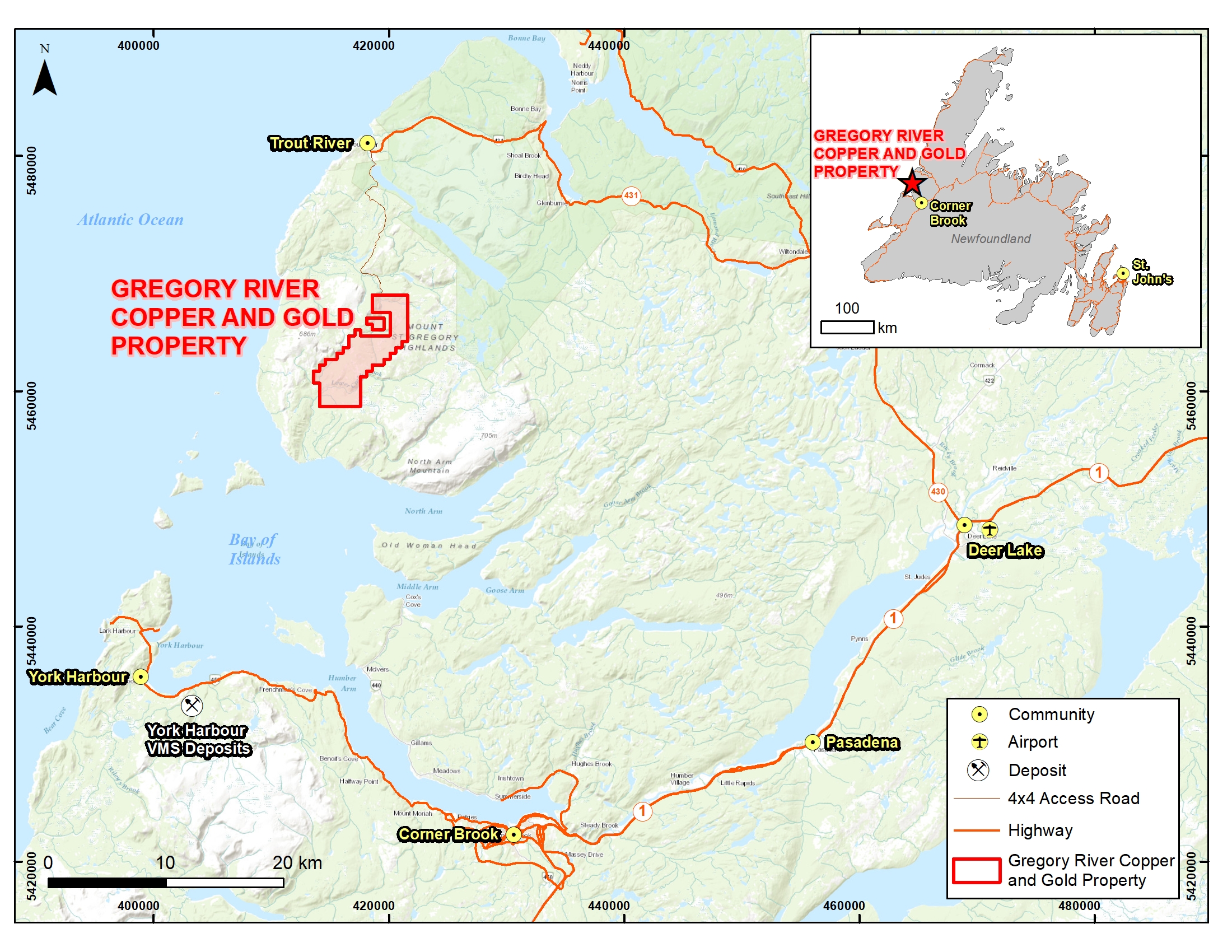 The Property lies approximately 27 kilometres north-northeast of the York Harbour deposit, a Cyprus-type, copper-zinc-silver VMS deposit, which was historically in small-scale production during the early part of the 1900’s and is currently being explored by York Harbour Metals.  The Gregory River Property occurs along the same trend of prospective VMS-style mineralization as the York Harbour deposit and is hosted in the northern continuation of the same Bay of Islands ophiolitic sequence of basaltic, gabbroic, and ultramafic rocks with their fragmental equivalents. 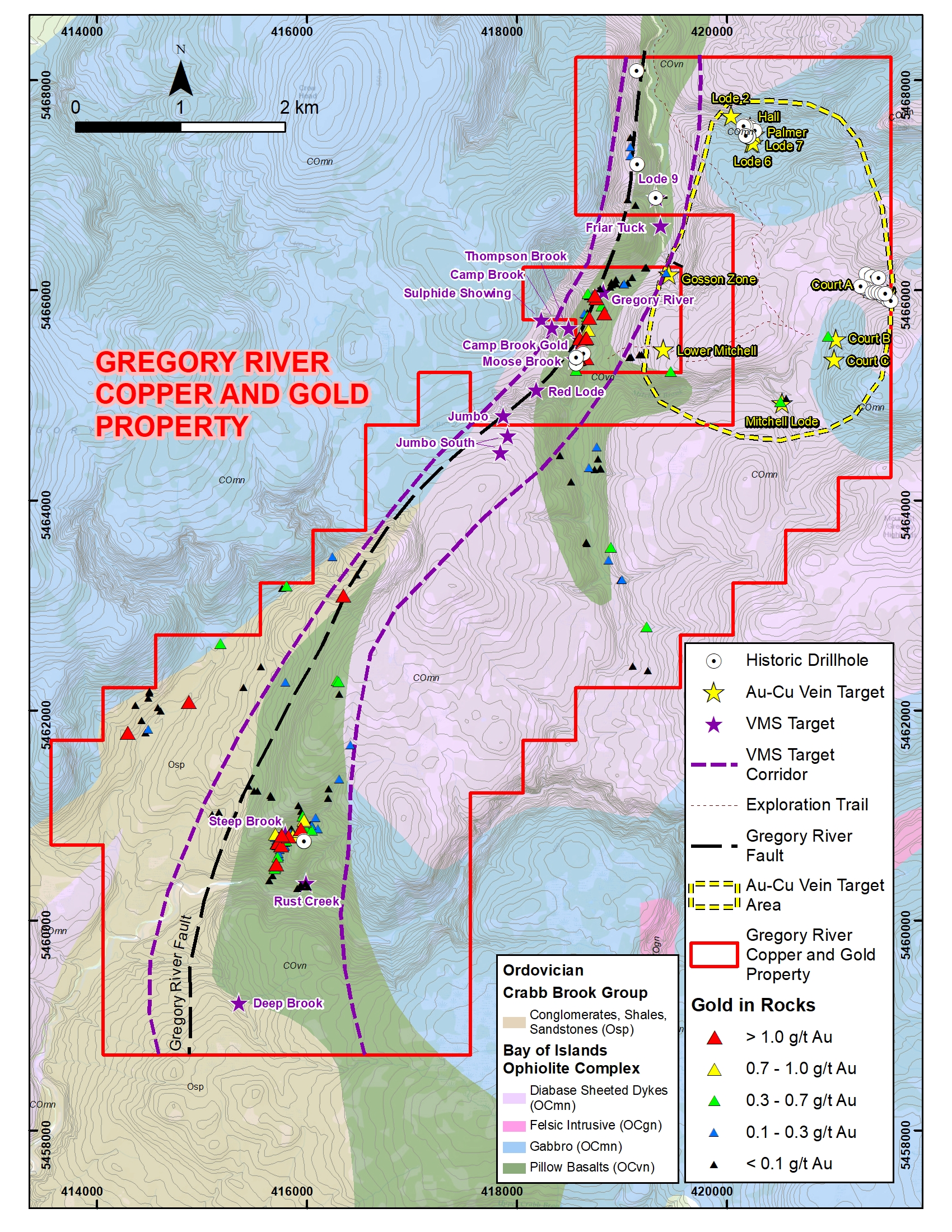 Intermittent historical exploration over the Property and within the district has been carried out by numerous companies since high-grade copper mineralization was first discovered in the early 1920’s.  Subsequent exploration, until the 1970’s, mainly focused on the vein-style mineralization and led to the discovery of multiple, high-grade, copper ± gold veins and structures at the Court A, B, & C, Hall, Palmer, Lodes 2, 6, & 7, and Mitchell prospects.

Starting in the early 1980’s companies continued to evaluate the potential of the veins, however started focusing more on the potential for stratabound, Cyprus-type, VMS copper-zinc-silver-gold mineralization on the Property and in the district, with the most comprehensive programs by Riocanex (Rio Tinto; 1981 to 1982), Duval (1981 to 1985), Noranda (1991 to 1992) and Playfair Mining (2005 to 2008).  Their work led to the discovery of several VMS-style mineralized showings and prospects, both on and adjacent to the Property.

As far as Golden Spike is aware no companies have completed any significant exploration programs on the Property since 2008.

Most of the previous work has been on selected targets on the Property, while the majority of the Property remains underexplored. Historical work has consisted of prospecting, geological mapping and sampling, stream sediment and soil sampling, airborne and ground geophysical surveys.  In the 1950’s two small exploration adits, approximately 30 and 90 metres in length, were excavated at the Mitchell and Palmer prospects, respectively.

Approximately 38 shallow core holes, averaging less than 100 meters in length have been drilled to test the vein-style targets at the Court A (17 holes) and Hall/Palmer (11 holes) prospects.  In addition, 10 core holes, averaging just over 100 meters in length were drilled to test VMS targets at Camp Brook/Moose Brook (5 holes*), Lode 9 (4 holes) and Steep Brook (2 holes).   Three of the VMS targeted holes, one from each target, were abandoned at fairly shallow depths due to drilling problems.

*The Camp Brook/Moose Brook prospect straddles the west boundary of one of the licences on the Property and all of 5 of these holes, although collared on the Property, cross onto an adjacent property.

The Gregory River Property is located on the western margin of Newfoundland hosted within the Bay of Islands Ophiolite Complex, within the Humber Arm Allochthon of the Humber Laurentia Zone.

The geology of the Property is underlain by faulted and variably deformed, north-northeast trending sequence of ultramafic to mafic intrusive rocks, including dunites, pyroxenites, gabbros, sheeted diabase dikes, basaltic pillow lavas and narrow zones of sedimentary rocks of the Lower Ordovician Bay of Islands Ophiolite Complex.  A broad, regional north-northeast trending, gently plunging synform is interpreted to run through the southern portion of the Property, with associated local anticlinal fold pairs, and possibly continuing further north.  The north-northeast trending Gregory River Fault transects the western portion of the Property along with numerous associated fault splays and localized zones of shearing and brecciation. The Gregory River fault, and several cross-cutting structures appear to be spatially associated with many of the VMS and lode-style prospects on the Property.

The VMS-style prospects at Gregory River are believed to be Cyprus-type deposits and are mostly hosted within basaltic units close to the contact with gabbro and are generally located to the east of the Gregory River Fault.   VMS prospects identified on the Property include Lode 9, Gregory River, Moose Brook/Camp Brook*, and Steep Brook/Deep Brook prospects. 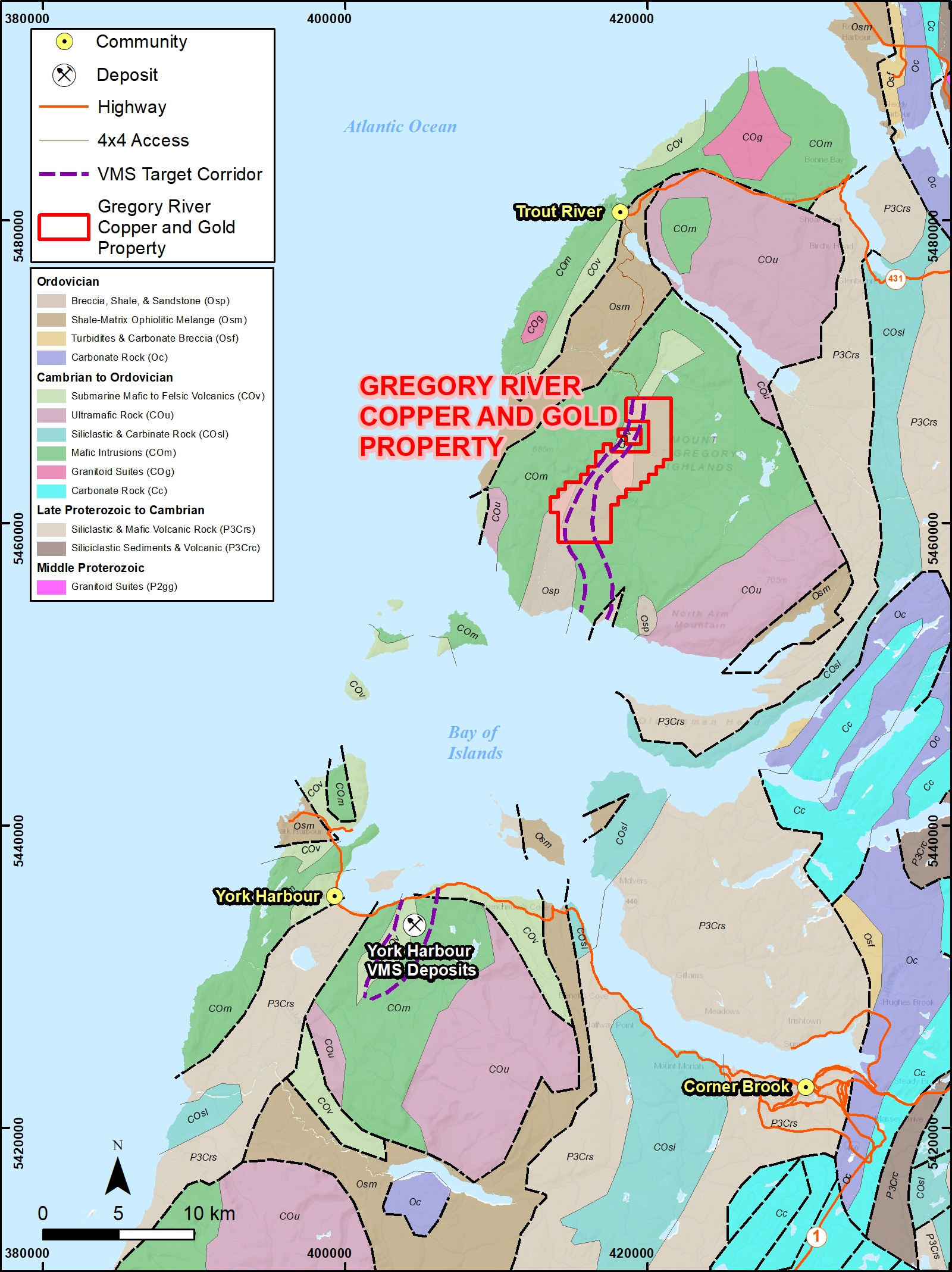 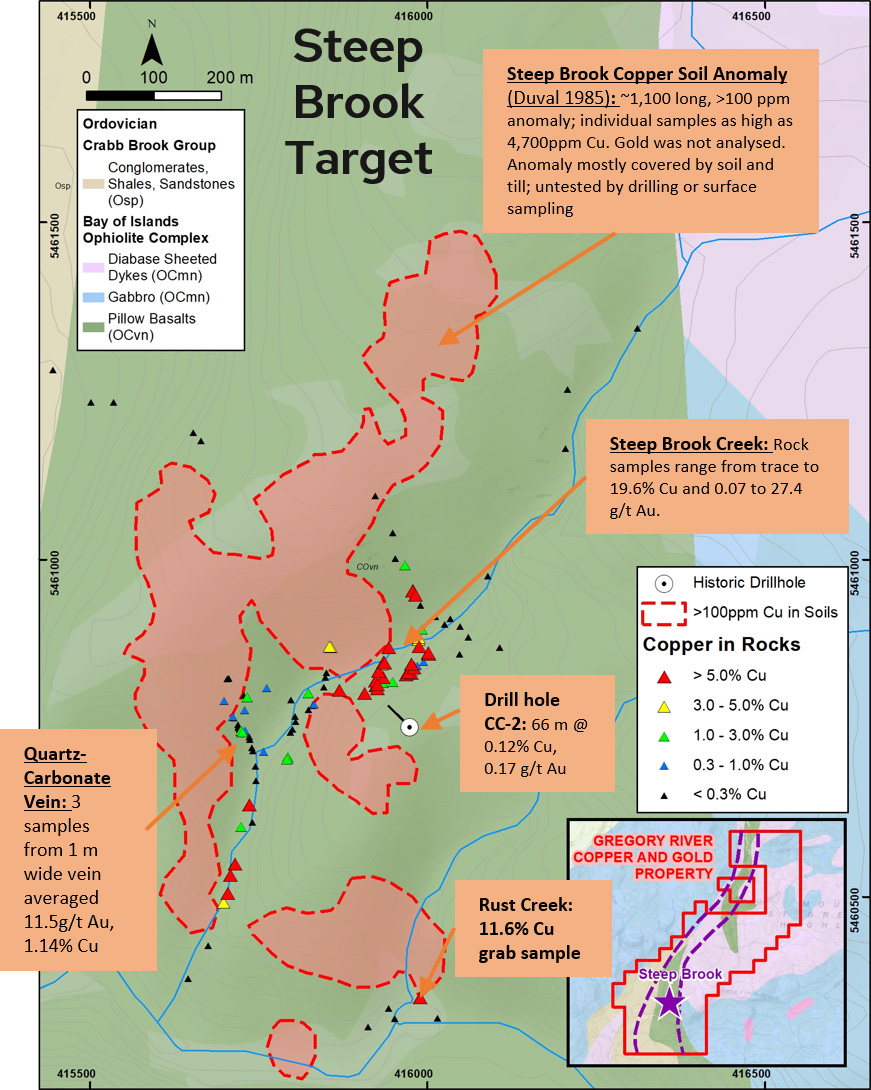 *The Camp Brook/Moose Brook prospect straddles the west boundary of one of the licences on the Property and portions of the mineralization may occur on an adjacent property. Insufficient drilling has been done to estimate the true widths of the drilled intervals.

In the northeast quadrant of the Property there are several south-easterly to north-easterly-trending high-grade copper mineralized veins and structures, which include the Hall, Palmer, Lodes 6 & 7, Court A, B, & C and Mitchell prospects. These sulphide-rich veins are generally 0.5 metres to 2 metres in width, but locally as wide as 5 to 6 meters. Historical surface sampling, diamond drilling and two underground exploration adits have traced these structures for distances ranging from several meters to more than 350 metres along strike, along which copper grades generally average around 2% to 5% but are often in excess of 10% copper. Historically, gold was not consistently assayed, but indications are that anomalous gold grades in the range of 0.1 g/t to 3.0 g/t are locally associated with the copper mineralization, along with anomalous silver, zinc and cobalt. Historical sampling generally focused on the highest-grade portion of the vein and potential exists for wider mineralized haloes to surround the main veins and for the discovery of new veins hidden below the extensive surface soil and till cover.

Selected historical down-hole drilling results* from the 1950’s drilling at the Court A Vein Prospect*, are shown below.

*Gold was not analysed for these holes. True widths are estimated to be approximately 60% of drilled widths 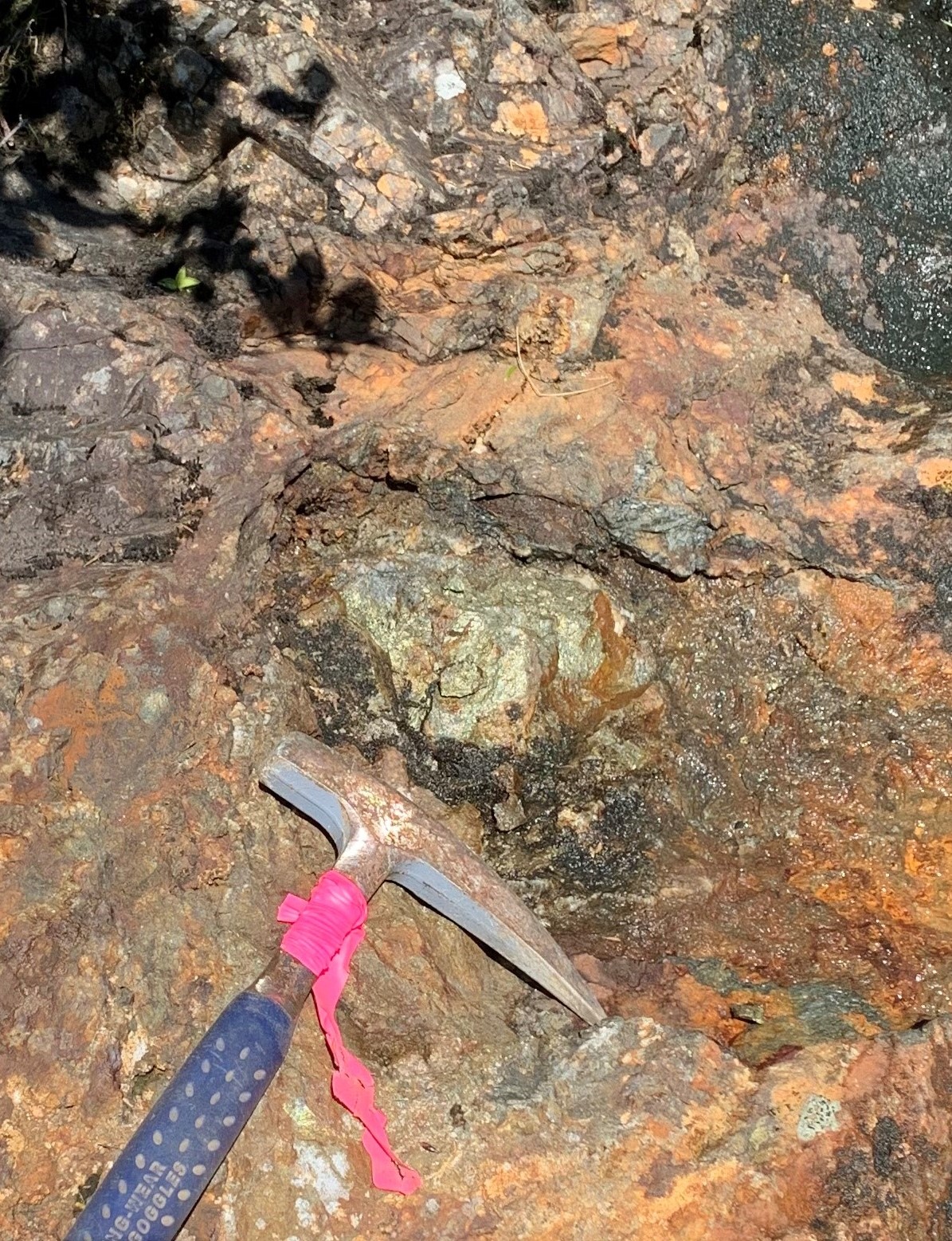 Documentation of most of the historical drill holes is very limited, especially for the pre-1950’s holes drilled at the vein-type prospects.  Historical sampling of much of the drill core from these holes was very selective and only the highest-grade sulphide mineralization was assayed. In many holes only one or two samples were collected per hole, even though drill logs indicate the presence of narrow chalcopyrite stringers adjacent to the main veins in several of the holes.  In addition, no assay data exists for some of the holes and very few of the historical drill holes have been kept.

Note that mineralization hosted on adjacent and/or nearby properties is not necessarily indicative of mineralization hosted on the Company’s property. Since very little of the historical core has been kept, the QP is not able to validate these historical drill results and therefore these results should not be relied upon.  Since the companies that collected the historical drilling data were mid-size to large, reputable companies that would have had sampling methodologies and quality control processes in place that were considered industry-standard for that time, the QP feels that it is reasonable to report these results as historical and provide a use guide for future exploration at these prospects.

To the east of the Camp Brook/Moose Brook prospect is the Lower Mitchell zone, an east-to north-east trending, structurally controlled zone, hosted within intensely silicified basalt, mineralized with pyrite, chalcopyrite, arsenopyrite and traces of sphalerite. The alteration and mineralization are exposed in several outcrops and in an historically trenched area, spaced over an approximate 180 metre distance; however, the true width, orientation and dimension of this zone remains to be determined. Recent grab, float and channel chip samples by the Company returned anomalous copper and gold values, along with minor amounts of zinc, arsenic and occasional cobalt. Two channel chip sample lines were sampled and returned anomalous values of copper, gold, zinc and silver, including.

In general, outcrop exposure on the Property is very low, probably averaging <3% of the Property and most of the known rock outcrops and mineralized prospects are exposed in creek beds and eroded valleys. This provides both opportunity and challenges, to make new discoveries below soil and till cover in a very prospective area that remains largely underexplored.

The Company believes there is very good potential to discover extensions to the known veins and VMS occurrences, both along strike and at depth and to discover new mineralized zones hidden beneath the extensive soil and till cover. 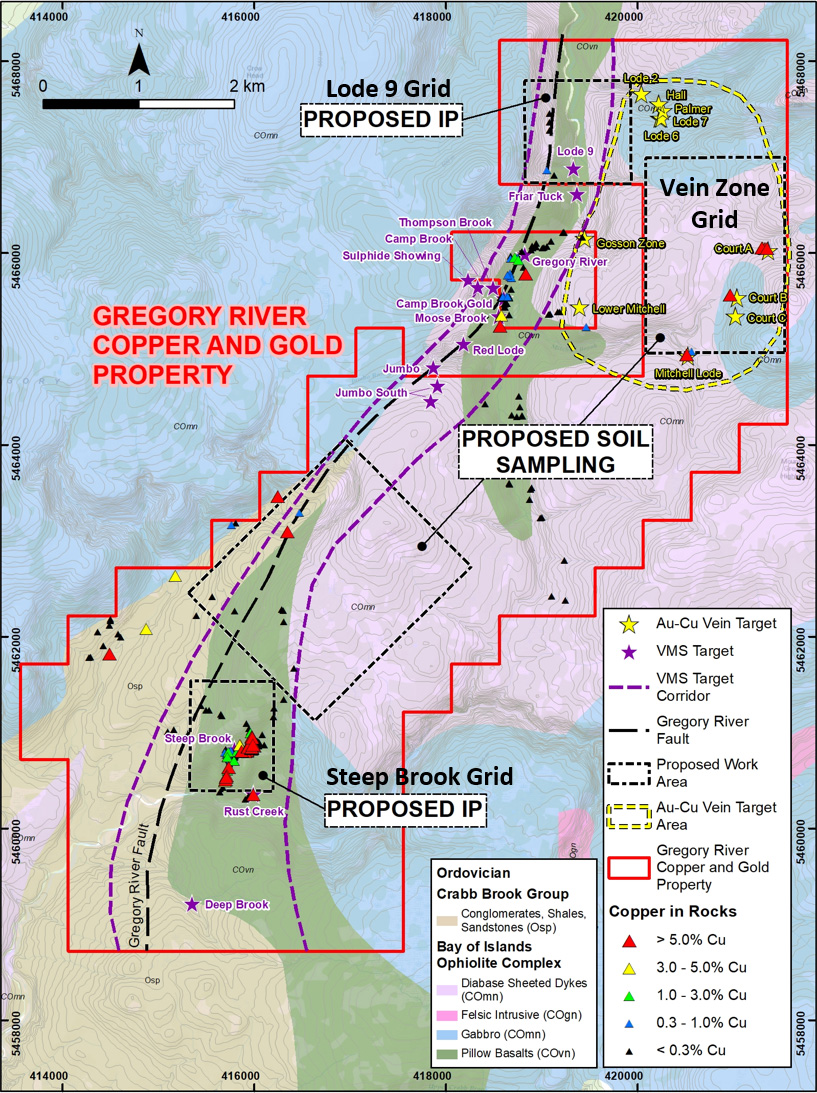 In July 2022, the Company completed the acquisition of Golden Horizon Exploration Corp. (“Golden Horizon”) and through this, an option to acquire 100% interest in the Gregory River Property. On December 7th, 2022, two additional key licences were added to the Property, further consolidating Golden Spike’s land position.  The Company how holds the majority of the Gregory River VMS-trend and several high-priority copper-gold targets, along with a cluster of high-grade copper-gold vein-type structures that occur just east of the VMS-trend.

In March 2022 Golden Horizon had completed an airborne magnetic survey over the Property, as well as target-focused prospecting and sampling.  The magnetic survey has been very useful in the on-going interpretation of the mineral potential of the Property and especially the delineation of lithologies, structures/faults and folds and other potentially mineralization hosting structures on the Property.

Sampling, prospecting and interpretations by Golden Horizon and work by previous explorers demonstrates the high potential for additional copper and gold mineralization to be discovered on the Property, but also highlights the fact that the Property still remains largely underexplored.

The Company has been reviewing and digitizing all of the historical information, dating back to the 1920’s to assist with target delineation and planning for follow-on exploration. This includes downloading and indexing dozens of exploration files from the Newfoundland and Labrador Government’s GeoAtlas, including geological reports, diamond drilling and soils/till sampling logs and assay results, detailed geological maps, geochemical sampling results and geophysical survey data.

A two-phase exploration program is being planned to outline potential zones of mineralization and drill targets, as shown below: