Vancouver, British Columbia, December 21, 2022 – Golden Spike Resources Corp. (CSE:GLDS) (“Golden Spike” or the “Company”) is pleased to announce that it has received analytical results from a recent program of reconnaissance rock sampling over the northern half of the Gregory River Copper-Gold property (the “Property”), located in Newfoundland and Labrador.

“We are excited to receive the results from this reconnaissance sampling program at our 100%-controlled Gregory River Property.  These samples were collected from multiple target areas in the north half of the Property and provide further support for the range of grades reported from the historically collected samples.  In addition to the significant copper grades, many of the samples returned anomalous values of gold ± silver and zinc and other pathfinder elements, further enhancing the exploration potential of the Property.  Several of the samples returned gold values greater than 1.0 g/t gold, and as high as 5.02 g/t gold, and these areas will definitely be further evaluated during the next phase of exploration”

Between August 6 and September 13, 2022, the Company completed prospecting and sampling at selected target areas in the northern half of the Property (Figure 1).  The prospects in the southern half of the property, including the recently acquired Steep Brook prospect, were not visited during

this program, however, these areas remain key targets that will be evaluated during upcoming phases of exploration.

Samples from the VMS targets are mostly from basaltic rocks with varying amounts of disseminated pyrite, chalcopyrite, as well as zones of quartz stringers and veinlets.    Two of the samples, 815664 from Lode 9 and 815671 from Moose Brook are highlighted since they both returned significant values of gold (3.48 g/t and 5.02 g/t, respectively) and copper (18.70% and 0.96%, respectively). These areas will form part of follow-up work during Phase 2 next year to better determine mineralization controls and dimensions.

The samples collected from the vein-style targets are mostly from 1-2-metre-wide quartz veins and structurally controlled stockwork zones, hosted in basalt and gabbro and mineralized with varying amounts of pyrite, chalcopyrite, arsenopyrite and minor bornite and sphalerite.

The Lower Mitchell prospect appears to be a wider, east-to north-east trending, structurally controlled zone, hosted within intensely silicified basalt, mineralized with pyrite, chalcopyrite, arsenopyrite and traces of sphalerite.   The alteration and mineralization are exposed in several outcrops and in an historically trenched area, spaced over an approximate 180 metre distance; however, the true width, orientation and dimension of this zone remains to be determined.  Many of the grab and float samples returned anomalous copper and gold values, along with minor amounts of zinc, arsenic and occasional cobalt (Figure 2 and Table 2).

During the recent sampling program, the Company collected two, north-south oriented channel sample lines at Lower Mitchell, each spaced approximately 15 metres apart.  Channel #1 is two metres in length and comprised of two, one-metre channel chip samples.   Channel #2 is 5 metres in length and comprised of five, one-metre channel chip samples (Table 3).  The sample results reveal multiple anomalous values of copper, gold and zinc, along with isolated silver anomalies and pathfinder elements, such as arsenic.  A one-meter sample from Channel #2 returned a very high-grade value of 12.9% copper along with 0.23 g/t gold, 11.5 g/t silver and 0.27% zinc.  Additional work is warranted at Lower Mitchell during Phase 2 exploration to better understand the mineralization controls and potential dimensions. 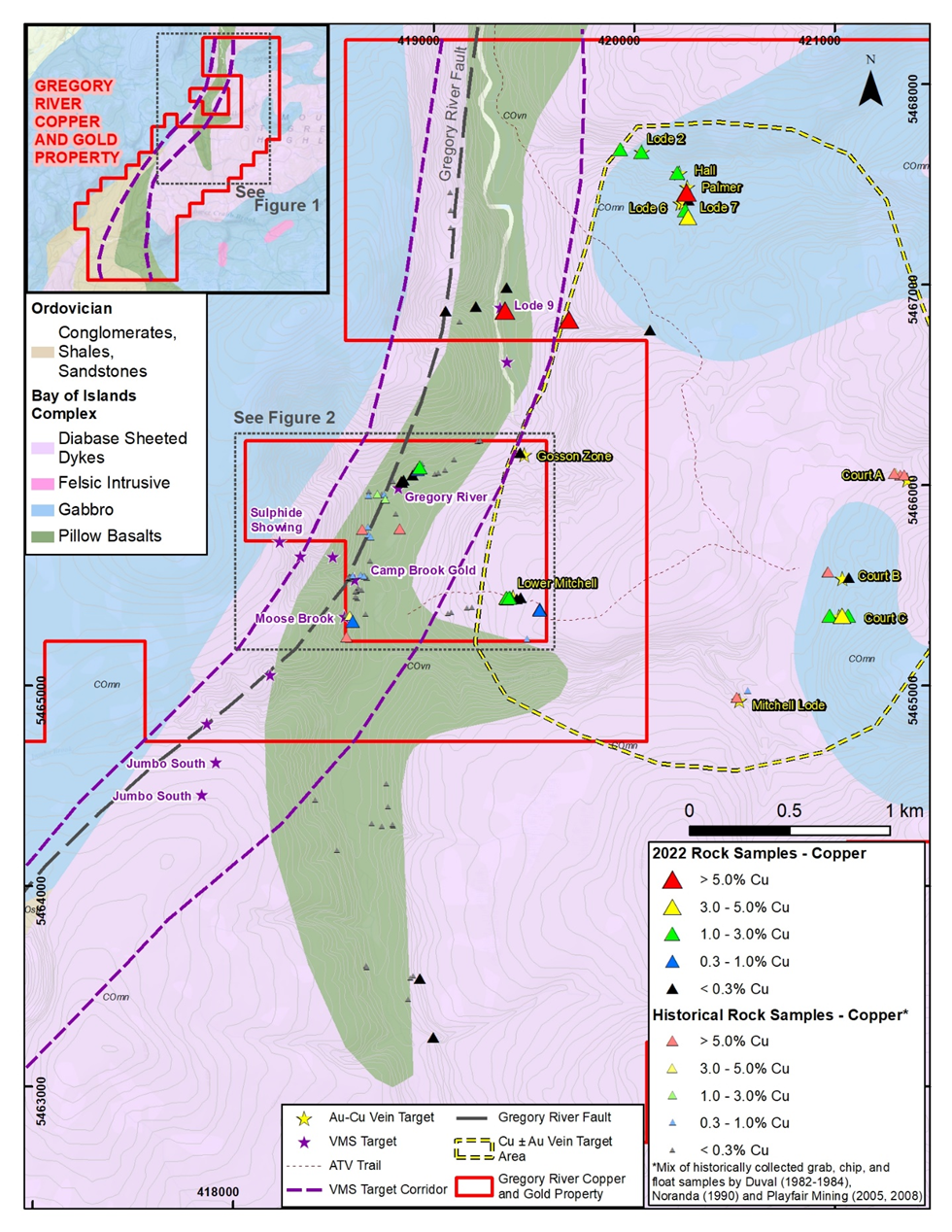 Figure 1: Location of Reconnaissance Samples and Targets in the North Half of Gregory River Property 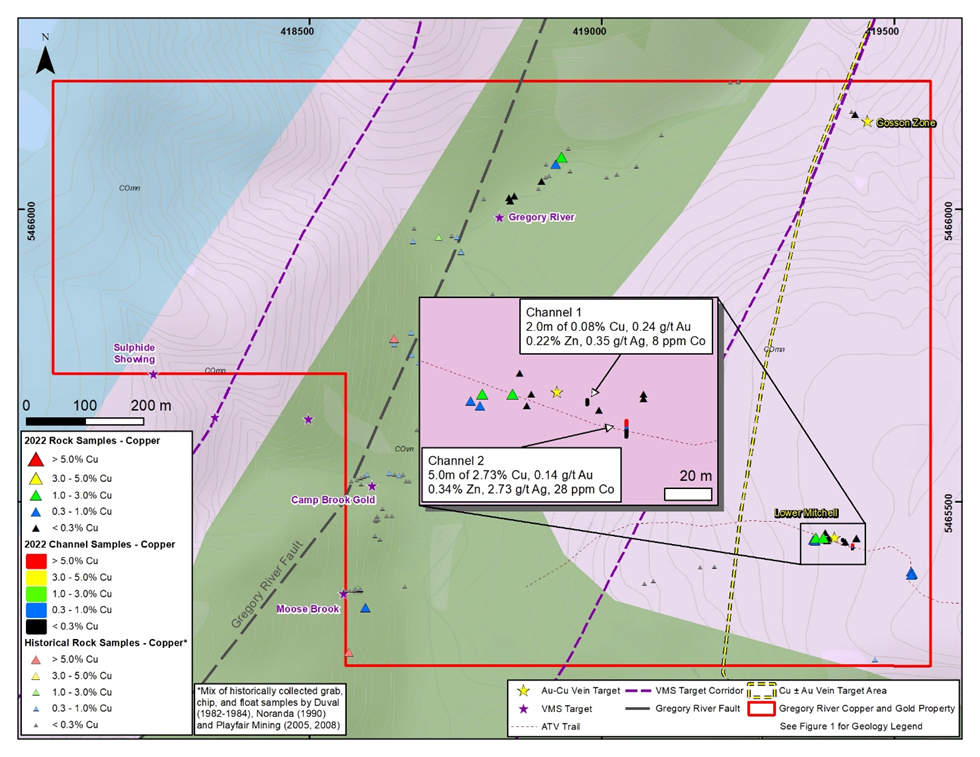 *Outcrop Grab samples are representative chip samples from outcrop over an area generally around 0.5 - 1 metre square; Angular Float samples are pieces of rock interpreted to be sourced from nearby outcrops or historical trenches.

The results of the recent reconnaissance sampling are significant since they support the general range of grades reported from historical sampling programs over the same prospects and they demonstrate that in additional to high-grade copper, anomalous values of gold, and other elements are present in many of the current target areas and should form an important part of on-going exploration. The reconnaissance samples also provide a database of potential associated metals and pathfinder elements that will be incorporated into data interpretations once the Phase 1 soil sampling program is complete and analytical results are returned.

On November 9, 2022, the Company announced that Phase 1 exploration had been initiated over the Property (refer to press release “Golden Spike Initiates Field Program over Gregory River Property”). Soil sampling grids were designed over two separate areas, one over the Vein Zone target area and the other, in the southern half of the Property covering the Steep Brook North target area.  Soil sampling was recently completed over the Vein Zone and samples will be submitted to Eastern Analytical Ltd in Springdale Newfoundland (“Eastern Analytical”) for analyses.   However, due to difficult weather conditions over the past several weeks, the Company decided to defer the soil sampling at the Steep Brook North target until H-1 2023, once conditions improve.

Sampling and prospecting for the reconnaissance program and the soil sampling program was completed by Planet X Exploration Services Ltd., based out of Gander, Newfoundland, on behalf of the Company.  All rock samples were submitted to Eastern Analytical, where they were analysed for gold by a 30-gram fire assay and a 34 -element ICP-OES package, using a 4-acid digestion.  Samples that were over the upper detection limits for copper, zinc, silver and cobalt were further analysed by atomic absorption, using a 3-acid digestion.  The soil samples will follow the same analytical protocols.  The Company follows a rigorous quality assurance/quality control (QAQC) program for the sampling programs that includes the regular insertion of standards, blanks and duplicates into the sample stream.

The scientific and technical information in this news release has been reviewed and approved for disclosure by Mr. Robert Cinits, P.Geo, a director of the Company and a "Qualified Person" within the meaning of National Instrument 43-101 - Standards of Disclosure for Mineral Projects.

ON BEHALF OF THE BOARD OF DIRECTORS

“Neither the Canadian Securities Exchange (the “CSE”) nor its Regulation Services Provider (as that term is defined in policies of the CSE) accepts responsibility for the adequacy or accuracy of this release.”